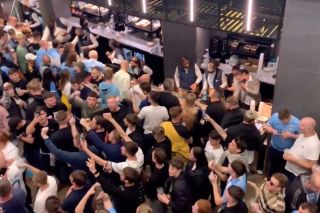 Likeminded Reds see them both as the gift that keeps giving.

From offering people out through steel bars outside Old Trafford to mocking two footballers who were on the receiving end of racist abuse this summer, you just don’t know when the next level of stupidity will come from that Leeds lot.

It’s a little surprising with Rashford growing up as a Wyhthenshawe lad. And, on top of that, he has helped keep the country’s children fed for the past year and he gets a ton of racist abuse after missing a penalty in the Euro 2020 final…

After winning the league last season, City fans were focused on United – copying a chant sung by Leeds fans aimed at Jadon Sancho and Rashford.

City fans could be heard singing (rare occurrence): ‘Sancho and Rashford, you’ve let the country down’

Sancho and Rashford let the country down 🎶 pic.twitter.com/9bxPgnYGtY

I wonder if they are still singing after starting the season with a defeat against Tottenham.

“Are you watching Harry Kane?”