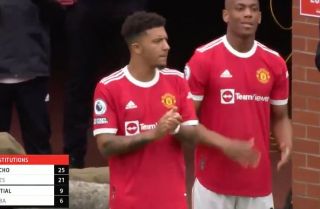 Jadon Sancho has come off the bench to make his Manchester United debut in the Premier League against Leeds United.

Fans were buzzing as Sancho got off the team bus this morning, after Ole Gunnar Solskjaer announced that the England winger would make his debut today.

United are winning 5-1 and the introduction of Sancho and Anthony Martial off the bench — with over 10 minutes remaining — will be sure to keep the Leeds fans at Old Trafford extra quiet.

As you can imagine, they’re not singing anymore.

BT Sport have video footage of Sancho marking his introduction to Old Trafford, as seen below:

It’s been a long time coming when you consider how United have tracked Sancho for over two years.