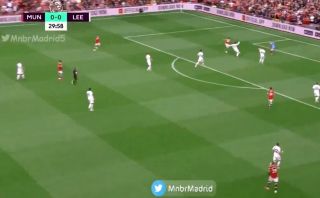 The ball came deep from Scott McTominay before Paul Pogba chipped it in from behind to find the Portuguese Magnifico.

Fernandes took a touch before striking for goal and opening the scoring in style for the Red Devils.

Old Trafford went wild as it saw its first goal of the season and Fernandes hasn’t been able to play in front of a full Stretford End on many occasions due to restrictions previously in place to tackle the coronavirus.

It just had to be him…

What a ball from Paul Pogba to set up Fernandes for the opening goal! 👌 pic.twitter.com/y8lE224hCB

If anything, it shows the lads are gelling quickly, but we did miss some big opportunities earlier in the game. It’s been a good performance with plenty of attacking flair.

There’s more goals in this game for United.