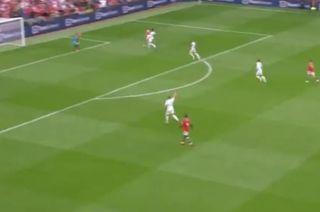 An unbelievable run followed by a breathtaking finish.

Bruno Fernandes is on fire as Manchester United start their 2021/22 Premier League campaign.

There’s no doubting that he loves a crowd and Bruno Fernandes has stood tall in front of a full Old Trafford.

To score his first ever hat-trick for the club, Fernandes made it 4-1 in favour of Manchester United against Leeds.

A long ball from Victor Lindelof found the Portuguese Magnifico and he found the back of the net with a smashing finish.

You cannot take your eyes off this game! pic.twitter.com/M9UjS3aoJS