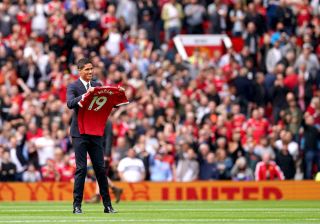 Manchester United got off to the best possible start to the season after beating archrivals Leeds United on the opening day of the campaign. It was, however, the way they won that won over the supporters on their return to Old Trafford.

Raphael Varane was unveiled as Manchester United’s third signing of the summer prior to kick-off and what a spectacle the 28-year-old witnessed.

Bruno Fernandes scored his first hat-trick for Manchester United as Paul Pogba showed off his class, recording as many as four assists to take himself to the top of the charts – and at this rate, no one is catching him anytime soon.

Mason Greenwood also impressed – the teenager scored the important 2-1 goal to regain the lead after Luke Ayling had equalised for the visitors.

Varane reacted to his unveiling at full-time with a simple but heartwarming tweet, quoting the official Manchester United Twitter account with a ‘heart-eyes’ emoji, as seen above. He also responded to Marcus Rashford welcoming him to the club.

If the reaction to his unveiling was anything to go by, Varane is going to be the latest fan-favourite at the club. The 28-year-old, who won four Champions League’s at Real Madrid, will now be hoping to feature in the next game against Southampton.

Varane will wear the No.19 shirt at the club, having worn it at Real Madrid in his teenage years. As a result, Amad will change to No.16, as confirmed by the club earlier this week.