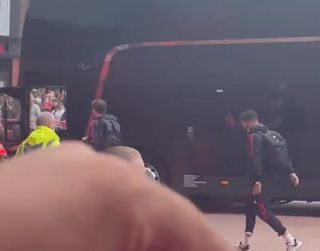 Every Manchester United fan is excited to see Jadon Sancho in action against Leeds United.

Manager Ole Gunnar Solskjaer made it clear new signing Sancho would feature in the opening game of the Premier League season, but he did not say whether he’d start against Leeds.

Read more: Jadon Sancho says he has the same mindset as Bruno Fernandes

Fans cheered the players off the bus but Sancho got a notable response.

See video below from outside Old Trafford:

We’ll know in the next 20 minutes whether he starts the game or not.