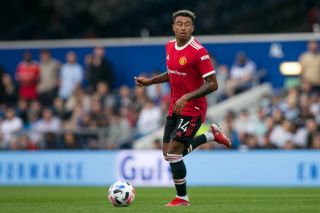 Manchester United start their Premier League season today at home against Leeds United. Manager Ole Gunnar Solskjaer has provided an update on how three absent players are getting on.

Jesse Lingard and Dean Henderson have both been ruled out of action today, having recently tested positive for COVID-19. Deano is understood to be suffering from fatigue whereas Lingard shouldn’t be out for much longer.

They were both absent for last weekend’s 4-0 friendly win over Everton.

“Jesse should be test to release very soon, hopefully he’s got rid of the virus,” says Solskjaer in an interview with ManUtd.com.

“Dean is still feeling a little bit the after-effects so we’ve had to shut him down a little bit and he’ll get going very soon.”

It gives David de Gea a chance to fill the fans with confidence again as the Spaniard is set to start today’s game ahead of new signing Tom Heaton.

Meanwhile, Phil Jones (remember him?) is still working to retain full fitness after over 18 months out injured. The manager hinted that he might need some game time before playing in the first team again, which is good news for the U23s following the re-signing of Paul McShane.

“I’m impressed by his [Jones] resilience in training,” Solskjaer added. “We have to manage the workload early on.

“I’ve been part of that myself after being out for the best part of a year and a little bit more than that. He’s been so determined and worked so hard.

“Now is not the time to rush things, now is the time to really do the last bit perfectly. As I said, Reserve games, Under-23s, maybe behind closed doors.

“He’s already had in-house games against the 23s so it’s looking good.”