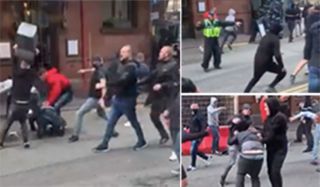 Six people have been arrested after a brawl before Manchester United’s Premier League opener against Leeds United in Manchester city centre.

Footage did the rounds before kick-off (12:30 BST) which showed chairs and bins flung in the air during a coming together in the city centre.

The GMP now claim to be working with both clubs to identify those involved.

Today marked the full return of fans and most behaved and went about their day.

But, ultimately, we can say Leeds were beaten both on and off the pitch, right?

Manchester United unveiled new signing Raphael Varane on the pitch before the game started, and on top of that, the Reds beat “dirty Leeds” 5-1 following a Bruno Fernandes hat-trick.

Mason Greenwood and Fred were the other two players who managed to get their name on the scoresheet.

The lads will be hoping to make it two wins from two next weekend against Southampton.

4 responses to “Six arrests made before Manchester United v Leeds”