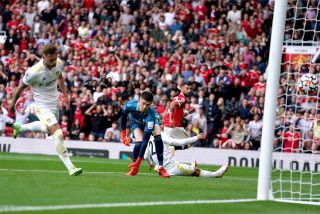 Manchester United made a statement in their Premier League curtain-raiser against Leeds United at Old Trafford. Raphael Varane was announced as their third signing of the summer ahead of kick-off and that proved to be the first of several loud cheers at United’s home.

Bruno Fernandes, who has started the campaign in the best possible fashion, scored his first of three goals in the first half before Leeds equalised through Luke Ayling after the interval.

The goal from Leeds provoked a spectacular response from Manchester United, scoring as many as four more goals before comfortably seeing the game out. See player ratings below.

David de Gea – 7
The 30-year-old could do nothing for the goal and handled everything else very calmly. Solid afternoon.

Aaron Wan-Bissaka – 9
An almost flawless afternoon for the right-back, often showing off his improvements in the final third. He looks far more composed with the ball at his feet and links up well with United’s forwards.

Victor Lindelof – 9
Another fantastic display and what a way to start the campaign. The new Sweden captain assisted Fernandes’ third goal.

Harry Maguire – 9
The leader in the backline and United’s most important defender. Raphael Varane will be glad to have someone like him in the backline.

Luke Shaw – 8
A constant threat down his flank, proving once again why he was in last year’s Premier League Team of the Year.

Fred – 9
After just featuring in one pre-season game, not many would have tipped Fred to start the game but he did and scored his third Premier League goal for the club. Solid performance.

Bruno Fernandes – 10
We are running out of superlatives to describe this man. A hat-trick on the opening day of the season as he continues to prove the doubters wrong.

Daniel James – 7
Ran his socks off and worked for the team but lacked the cutting edge in Leeds’ defensive third.

Paul Pogba – 10
The perfect performance from Pogba, possibly one of his best in a Manchester United shirt. The 28-year-old recorded four assists as he started the season with a bang.

Mason Greenwood – 8
Sharp and precise. That’s what Greenwood was against Leeds, typified with the trademark finish to give United the 2-1 lead.

Substitutes
Nemanja Matic – 6
Came on to close the game.

Anthony Martial – 6
A wholesome moment for the Frenchman as he returned from a long injury lay-off. The 75,000 in attendance made it a memorable moment when they started singing his chant.

Jadon Sancho – 7
A great moment for the 21-year-old as he made his Manchester United debut. Came on to provide some silky skills but the best is yet to come from the young star.

One response to “Pogba gets a 10: Player ratings – Manchester United 5-1 Leeds United”