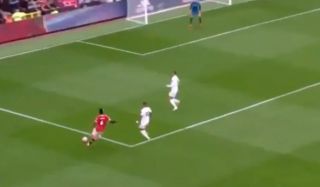 Although he didn’t score in the 5-1 win over Leeds United, it was up there with one of Paul Pogba’s best performances in a Manchester United shirt.

The 28-year-old, who has yet to commit his long-term future to the club, managed four assists on the opening day of the season.

Pogba was given the freedom to push forward on the left flank and Leeds ultimately struggled to deal with the World Cup-winner.

Manager Ole Gunnar Solskjaer spoke about the importance of giving Pogba freedom to express himself in his post-match interview, as per The Sun.

Check out his individual highlights below (via @HugoFilmzi):