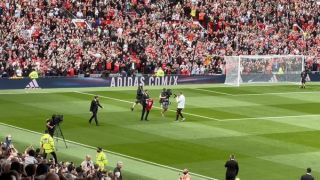 Manchester United have confirmed the signing of Raphael Varane on a four-year contract, with the defender making the switch from Real Madrid.

Varane joins the club following strong interest from Manchester United and after some delays, with visa and quarantine issues proving difficult, a deal is finally over the line.

The 28-year-old, who leaves Real Madrid with four Champions League winners medals, becomes Manchester United’s third signing of the summer after the arrivals of Tom Heaton and Jadon Sancho, as per a statement on the official Manchester United website.

Huge roar as Raphael Varane is introduced to the Old Trafford crowd with his #MUFC number 19 shirt pic.twitter.com/fLiDDTpeOp

Varane was introduced to Old Trafford in spectacular fashion as he took to the pitch ahead of today’s Premier League curtain-raiser against Leeds United.

It looked like an announcement of the signing could drag on for long but instead, the France international made an instant connection to the Old Trafford crowd as he soaked the atmosphere in on the opening day of the season.

“Manchester United is one of the most iconic clubs in world football and the chance to come here and play in the Premier League is something I couldn’t turn down,” Varane said.

“There is a lot more that I want to achieve in my career and I know I’m joining a squad full of great players who will all have the same determination to win matches and trophies. Having spoken to the manager I can see how much progress has been made over the last few seasons and I now join a group ready to play at the highest level.

“I want to make an impact here and I will give everything to become part of this club’s illustrious history.”