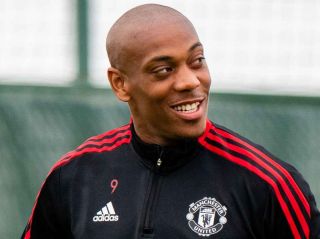 There are points in storytelling when you need to reach the breaking point. It’s that moment where the story reaches a climax and you know if the main character is going to succeed or not in overcoming the obstacles, thus giving us a conclusion to what we have seen.

It’s that moment for Anthony Martial and his career at Manchester United.

It’s common knowledge that the Frenchman had a very poor season last year. However you want to slice it, an end product of 7 goals and 5 assists in 36 games is very poor for a starting United striker and it brought back most of the criticism that Martial got during the days of Jose Mourinho and then some. And to be perfectly frank, not without reason.

Martial is an interesting player to analyse in the United squad because he rarely generates balanced takes. He is either loved or loathed, which I believe is a byproduct of the duality of his traits as a player. Not the best off-the-ball, but very gifted. Not consistent, but capable of incredible things. A very unemotional player in terms of body language, but a generous player when linking up with his teammates.

But that is the crux of the problem and that’s why Martial’s last season was such a key point in his United career. After having the best season of his career in 2019/20, scoring 23 goals and providing 12 assists, he had the worst season. Same manager, same teammates, same team, no long term injuries… and everything with just a few weeks in between.

Regardless of how much you like Martial, it’s definitely a concern that his performance levels dropped that greatly and this upcoming season is definitely make or break for him at Old Trafford.

It’s also important to analyse why he underperformed so much last season and what arguments does he have to do better in this one.

Before the 2020/21 season, Martial excelled in terms of finishing. Now, I’m not the biggest stats expert, but I understand how xG works and he constantly overperformed in that regard, which is the sign of a good finisher. Some people argue that this was never going to be sustainable, but we’re talking about a player who did it for five seasons straight and was mostly playing in United sides coached by Louis van Gaal and Jose Mourinho, who were not producing a lot of chances for their attacking players. So if the striker gets two chances per game and scores one, that’s a 50% of efficiency and that’s a sign of a good striker.

And considering that strikers rely a lot on confidence, which is something that an even better striker than Martial, Ruud van Nistelrooy, acknowledged throughout his career, then it is understandable that the Frenchman was struggling to get his finishing back to his best last season. Factor in elements such as lack of a pre-season, niggling injuries (which he has mentioned recently) and a very tight calendar due to the pandemic that left little very little room to rest and it’s a bit logical that Martial struggled last season. Not every player can react to these circumstances the same way.

However, it would be disingenuous to pretend that Martial’s struggles last season were solely down to bad luck, the tight calendar or especially lack of confidence. After all, his mentality has been questioned in the past and he has shown recently that when things got difficult for him, he failed to turn a corner–this in a season where Mason Greenwood and Edinson Cavani took their time to get going and Marcus Rashford was pushed to his absolute limits. In that regard, Martial was needed and he simply couldn’t be a reliable option for the team at 25-years-old. If we were talking about the 19-year-old we signed from Monaco, a little more leeway would be granted, but these are his prime years and he has been at his absolute worst.

But I believe this goes beyond just the mental side of things – I think there is also a technical factor in last season’s decline. And it’s something that I don’t think it’s mentioned enough regarding Anthony Martial: the lack of diversity in his finishing.

Everybody that has followed United since Martial got here knows that he has a signature finishing style, trying to place it in the bottom corner with his right foot. He has scored a ton of goals that way and it has become a signature move of sorts.

The problem arises when that’s all you got.

Martial rarely scores goals from other finishing techniques and that’s a problem because you become more predictable. The poaching instincts that the aforementioned van Nistelrooy or even his own manager, Ole Gunnar Solskjær, had to score from multiple angles or with different techniques is something that Martial doesn’t have. And when you just rely on one main technique to score, as a goalkeeper you have an easier time to save that shot because you already know what that striker is going to do.

Left-footed shots, headers, tap-ins, powerful long distance shots, the list goes on. Martial has done goals like that in the past. From the top of my mind I can remember a tap-in in the 4-0 win against Chelsea in 2019, a couple of great headers against the likes of Aston Villa or Chelsea or a great long distance shot against Southampton in the 2-2 in Project Restart (arguably his best performance as a United player). One of his best goals, from a technical perspective, was the left-footed shot he did against Wolverhampton in the 1-1 draw back in 2019.

So, he has done it in the past but he simply doesn’t do it enough. And while I think Paul Scholes went a bit too far when he said that Martial conned people into thinking he was a proper number 9, I can share the basic idea that he lacks the traits of a traditional goalscorer. This was a notorious contrast when Edinson Cavani fully adjusted to the team last season and was scoring goals in many different ways and showing the kind of movement and technique that a world class striker should have–it only makes Martial look worse in comparison.

But at the end of the day, it’s not so much about the lack of skills or trait to do these things–it’s that he doesn’t do it enough. And I don’t know if it’s a coaching issue (Ole has stated that he wants him to score those “ugly” striker goals) or is simply Martial lacking the instincts for the job, but he doesn’t provide that kind of threat and intensity that the position requires. The aforementioned 2-2 draw with Southampton was a great sample of what he could do as United’s number 9, but sadly that is the exception and not the rule.

There have been also criticisms towards his workrate, but depends a lot on what you want as a team. Ole has shown to have no qualms about getting rid of lazy players, so if he hasn’t been on Martial’s case throughout the years because of his lack of pressing, I would leave that to the eye of the beholder.

This is not to undermine Martial and claim he is useless. At his best he can be an important player for United. His numbers before last season were quite decent for an attacking player in struggling United sides and he has always been a great enabler for other attacking players to shine, as it was the case with his partnerships with Paul Pogba, Marcus Rashford, Bruno Fernandes and even a veteran Wayne Rooney at some point. This is good because it can allow other players to thrive and if you have wingers that like to score goals, which is the case of Marcus Rashford, Jadon Sancho or even Anthony Elanga, then Martial can help in that regard.

And this is the other side of the argument: Martial does have to score more goals than last season and reach a decent amount at that, but he can offer other things. He can dribble, he can link-up and he can open spaces for other players. And with Jadon Sancho coming along and Donny van de Beek a bit more established after a year of adaptation, these are the kind of players that Martial can team up with to have a positive impact.

Can he learn to be a more complete number 9? It seems to be very difficult at this point of his career, if you ask me. Martial was unfortunate to have Jose Mourinho, a manager that didn’t have a lot of interest in developing his talent, during key years of his career, but while he could enter the “late bloomer category”, I don’t see him becoming a traditional goalscorer overnight. If anything, his consistency should be the thing to improve because, at his best, he can offer something different to any other attacking option at United, especially at the striker position.
Both Cavani and Martial benefit from the current arrangement that the club has in that position: Cavani gets to rest to start once per week, thus keeping himself fresh, and Martial has enough game time to make a difference and get his best level back. It benefits for both parties and, above all, benefits United as a team.

What should the expectations be for Martial this season? It depends of his role. You can’t expect the same from a starting player than what you would do with a rotation player. In that sense, and considering the outcome of injuries and the need for rotation, if Martial sees his playing reduced compared to last season, 15 goals and 7 or 8 assists would be a very decent and acceptable production for him. If he can replicate his 2019/20 season or do even better, that’s obviously more than welcomed.

Manchester United bet heavily on Anthony Martial throughout the years. Not just because of the big fee that the club paid for him in the summer of 2015, but also because they backed him through his development years and the highs and the low that entailed. They had a lot of chances to get rid of him, especially during the Mourinho years when the Portuguese wanted to trade him for Inter Milan’s Ivan Perisic.

At this point of his career, entering his prime years, it’s time for him to pay them back with more consistency and with much more assurances of what he can provide on the pitch. Another season like 2020/21 should rightfully be the final nail in the coffin for his United career.

We’re reaching the breaking point of Anthony Martial’s career at Manchester United. It’s make or break for him.

One response to “Opinion: It’s make or break for Anthony Martial”