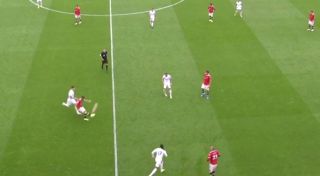 I think we are beyond the stage of needing to explain how Bruno Fernandes is more than a penalty merchant. And if you still have that opinion of the Portuguese Magnifico, it is clear to us you don’t watch enough football.

Bruno Fernandes was hungry for the start of the new Premier League season. Leeds couldn’t stop him on his goal-hunt as Manchester United’s talisman netted his first ever hat-trick for the club.

However, there was more to his performance than that. He linked up brilliantly in the middle with Paul Pogba on the left, with the Frenchman managing a whopping four assists on the opening day of the season.

The footage below — courtesy of Canal+ Sport — shows Fernandes pull off a volleyed pass from Luke Shaw’s throw-in to switch the play over to the right, where Aaron Wan-Bissaka collected the ball.

We certainly hope Fernandes’ hunt for goals continues throughout the season.

What a start to the season!