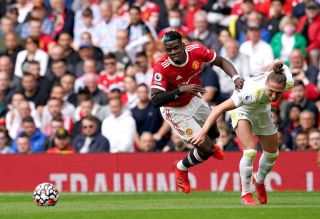 Bruno Fernandes believes Paul Pogba can build on his performance shown against Leeds United today in the 5-1 win at Old Trafford.

The French midfielder contributed four assists in United’s win over Marcelo Bielsa’s side.

I would say we got off to a perfect start, but I’m sure some players are annoyed by the fact we didn’t manage to keep a clean sheet. The only Leeds goal, scored by Luke Ayling, was a rocket of a strike. We didn’t close him down quick enough.

Fernandes was also in amazing form as he scored his first ever hat-trick in the Premier League.

On top of that, the Portuguese Magnifico became the first United player since Lou Macari, in 1977, to score three goals on the opening day of the season.

Speaking to MUTV, Fernandes made a point of Pogba’s display.

“Amazing,” he said. “He’s doing really well and he’s such a big player. Everybody knows that and I hope he can keep getting better and better, because I think he can still do so much more.

“I’m pretty sure Paul could do five or six [assists] in one game! Paul is a quality player; we all trust him, we all know his qualities. The point is making those performances and to help the team do better and I’m pretty sure Paul is here to do that.”

With Fernandes and Pogba both fit and in form, United will be turning their focus on making it two wins from two against Southampton next Sunday.

All players will be looking to hit form quickly but it’s encouraging to see our main stars start so brightly.