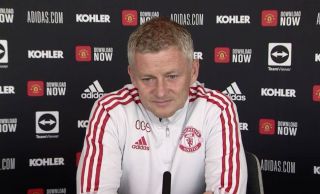 We are still waiting on the official announcement, but Raphael Varane will be a Manchester United player.

Ole Gunnar Solskjaer didn’t sound like there was anything to worry about when asked about the delay in announcing Varane as a United player.

The manager explained that these things take time – and more time than usual since clubs have had to follow COVID-19 guidelines and measures enforcing quarantine.

Speaking to the press this afternoon, Solskjaer said, as quoted by the Manchester Evening News: “He [Varane] hasn’t trained with us. Things take time.

“Not 100 per cent done yet. He won’t be involved because he has not trained with us.

“The big hold up was the quarantine and the isolation – it will be done soon.”

Read more: Klopp impressed by United spending to cover up Liverpool’s lack of

Transfer guru Fabrizio Romano reminded us that all was going to plan this morning, with a tweet claiming Varane signed his contract late last night.

It doesn’t come as a surprise that the French defender won’t be involved tomorrow against Leeds since he hasn’t had a full week of training with his new teammates.

I understand everyone wants to see him in action, as well as the frustration behind the delayed announcement, but we won’t be waiting much longer.