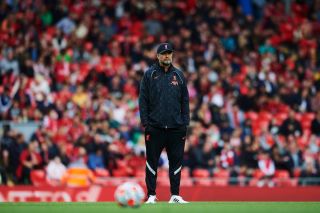 Liverpool manager Jurgen Klopp sounds rattled before a ball is kicked in the Premier League this season.

During Klopp’s press conference ahead of the Liverpool’s opening game of the season against Norwich City, the German spoke about Manchester United’s transfer business this summer.

He says he is unsure how United have managed to spend what they have this summer, while he is less “surprised” at Chelsea, Manchester City and Paris Saint-Germain.

Jurgen Klopp was asked if he was 𝙨𝙪𝙧𝙥𝙧𝙞𝙨𝙚𝙙 by the money spent by Liverpool’s title rivals off the back of a pandemic 👀#LFC pic.twitter.com/hKc4iGlBmi

And Klopp is whinging because Liverpool in comparison have spent just £36 million on Ibrahima Konate.

He is making out United’s spending is impressive to cover up Liverpool’s lack of, but behind it all, it’s a clear sign the Premier League is back when Klopp is moaning about United.