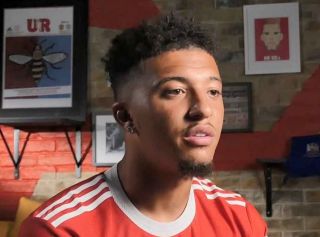 After a good pre-season tour, Manchester United embark on a new Premier League tomorrow with an opening game against Leeds United. Jadon Sancho looks set to make his debut after finally joining the club this summer.

For at least two years he was United’s most wanted and now Ole Gunnar Solskjaer has finally got his man. It’s been years since we had a proper right winger, too, and I think Aaron Wan-Bissaka will be the happiest about that.

It should shift some of the focus away from his play in the final third and, ultimately, help him approve that side of his game.

Solskjaer told the press this afternoon that Sancho would definitely be involved against Leeds. There was a hold up after his holiday due to illness that meant he missed some training, but it sounds like the winger is ready to hit the ground running.

“Jadon is going to be involved definitely,” Solskjaer is quoted by the Manchester Evening News. “Good week, but was ill after his holiday.

“He has looked sharper than expected. Can’t tell you if he is going to start though.”

Meanwhile, in an exclusive interview with BT Sport, Sancho says he is ready to make his Manchester United debut against Leeds.

Speaking to former United player Rio Ferdinand, Sancho said: “I’ve been waiting a long time for this move to happen, so I’m glad it’s over now and I can get ready to start the season against Leeds. I’m buzzing.”

When asked how fit he was, Sancho added: “I feel ready. Today in training I felt sharp and hopefully I can get introduced into the game on Saturday.”