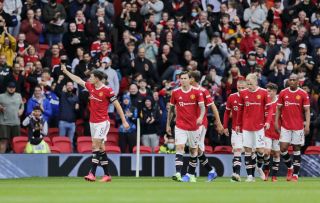 Leeds United’s visit to Old Trafford last season was historic. Not only did Manchester United score six goals but it was also the first time in 16 years the two sides faced each other in the Premier League.

Any meeting between Leeds and Manchester United is special but the lack of atmosphere in an empty Old Trafford was telling. The curtain-raiser of the 2021/22 season will, however, be different.

Marcelo Bielsa’s side make the trip to Old Trafford again with redemption in their sights but according to Manchester United captain Harry Maguire, the return of fans will boost his side.

“I think the fans are going to have a big part to play,” Maguire told the official Manchester United website.

“I can only speak on my first season at United where the atmosphere they created was amazing, not just at Old Trafford but away from home, they sing non-stop and follow us in their numbers and we really feel their support.

“I feel like we have the best fans in the country and I’m sure they’ll have a part to play this season and I can’t wait for them to experience being at Old Trafford again.”

Maguire, like several others in the squad, returned late to pre-season due to his involvement in this summer’s European Championship but he is expected to start the game against Leeds.

The last home fixture of last season is the only occasion where fans have been allowed entrance into Old Trafford since March 2020, when Manchester United beat Manchester City by two goals to nil.