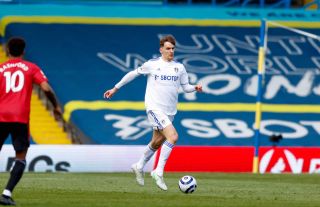 Manchester United have been handed a boost after learning that Leeds will be without one of their defensive stalwarts in this weekend’s Premier League curtain-raiser at Old Trafford.

Marcelo Bielsa’s side will be full of confidence ahead of the fixture but have now been dealt a gutting blow, especially considering how their defensive frailties were exposed in their last visit to Old Trafford.

The meeting last season saw eight goals scored between the two sides, with Ole Gunnar Solskjaer’s side scoring six, including four in the first half.

And it has now been confirmed that defender Diego Llorente, who was included in Spain’s squad for EURO 2020, will miss the game through injury, as per the official Leeds United website. There were also doubts over the fitness of Kalvin Phillips and Junior Firpo but the pair have been cleared to feature in the game.

Jadon Sancho could make his debut for the club after being spotted at the team hotel earlier on Friday, whilst Raphael Varane is awaiting an official announcement before he can be included in a matchday squad.