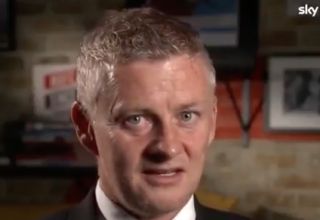 It feels like we’ve been waiting a lifetime for Jadon Sancho to arrive, but this week he started training with Manchester United and everyone will be itching to see him make his debut on Saturday against Leeds United.

Manchester United start their 2021/22 Premier League campaign with a home clash against rivals Leeds. There’s a good chance that game will be Jadon Sancho’s big introduction to playing at Old Trafford for the Red Devils.

Ole Gunnar Solskjaer has done an interview with Sky Sports ahead of the new season, and he made it clear that he is also excited about Sancho getting the ball rolling.

🗣️ "He is one of the most creative forwards in European football"

Ole Gunnar Solskjær is excited to see Jadon Sancho make his Manchester United debut – which could be v Leeds United this weekend pic.twitter.com/35k66sbuT6

Solskjaer accepts that with his new signings there is now a need to start winning trophies.

“We know we’re a good team, but we know we have a little bit to go to be where we want to be and win trophies.

“I’m excited by the squad, I don’t think anything is beyond these boys. It’s just how we fare between now and the end of the season.

“If you want to be the best you have to live like the best, you have to work as the best and perform every three days. It’s going to be tough, but it is possible, definitely.”

Solskjear added: “How much sacrifice, how much discipline, how much team camaraderie, how much consistency, how much hard work, blood, sweat and tears — all these qualities and cliches.”

With Marcus Rashford ruled out for the few couple of months this season, Solskjaer will want to see Sancho hit the ground running, and he has already labeled the winger one of the most creative forwards in European football.