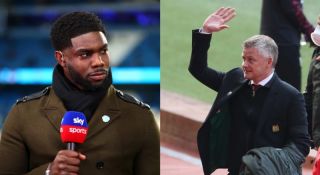 Manchester United have a lot of reasons to be optimistic this season but it’s a pet hate of mine whenever a former rival player comes out tipping us to do the business.

I prefer when we are not part of the conversation, like on Sky Sports this morning when they spoke about Man City, Chelsea, Liverpool and Arsenal (*cough*) all challenging for the title.

We’ll be there – but let’s try go about our business quietly.

Micah Richards believes both United and City will win silverware in the coming season.

“I think Manchester City will win the Premier League after a slow start,” he told NSport.

“They have a settled defence but might still need a left back and a striker. I see Chelsea as the biggest threat followed by Liverpool and Manchester United.”

Read more: Blow for United as Haaland prefers Spain for next destination

The new Premier League campaign kicks off this weekend, with the Reds hosting Leeds United at Old Trafford and fans will be hoping to see debuts for Jadon Sancho and Raphael Varane (Tom Heaton will have to wait).

Meanwhile, City will have to wait until Sunday evening to get their title defence underway.

We’re all desperate to see Solskjaer finally put an end to a wait for trophies at United, with the club last winning silverware four years ago in the Europa League. Last season, after reaching the final of the same competition, the lads fell short in Gdansk on penalties against Villarreal.