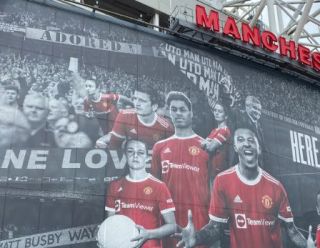 Old Trafford has a slightly different look this season, with a new mural put out in front of the stadium featuring players like Jadon Sancho.

A new banner has been unveiled but there’s no place for Raphael Varane as we eagerly await an official announcement from the club — which is likely to come today.

The image below was posted on social media by BBC journalist Emma Sanders.

It has been unveiled in time for United’s first game of the competitive season against Leeds.

Manchester United fans have had to wait a long time for Sancho, but this weekend we should all finally see him in action wearing a red shirt.

The England international was pictured training with his new teammates yesterday.