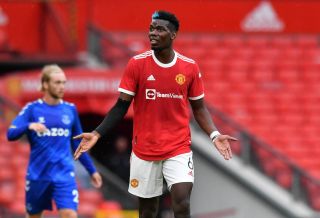 Manchester United will keep hold of Paul Pogba in attempt to persuade the player to extend his contract, according to reports.

ESPN claim Manchester United expected an offer from Paris Saint-Germain for Pogba, who has one year left on his current deal, but that was before the Ligue 1 outfit signed Lionel Messi.

The report stresses that it is now seen privately as “highly unlikely” that any club could raise the funds to make a suitable offer for Pogba, with the transfer deadline set for August 31.

One line that irked me a little was this one: “He remains central to Ole Gunnar Solskjaer’s plans and the 28-year-old is said to be comfortable about the prospect of spending at least another season at Old Trafford.”

So, have we just accepted that Pogba will leave on a Bosman in 11-months? That is bizarre.

On top of that, the report further explains United are “losing hope” that Pogba will sign a contract extension.

This shapes up for a season of tricks for Mino Raiola. Hardly ideal when we are setting up stalls for improvement on the pitch, while one of the star players is thinking about leaving as a free agent.

Not hard to imagine him skipping through the door next year, is it?