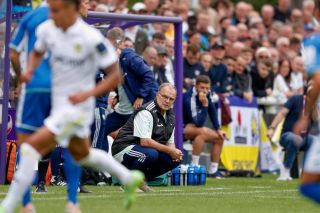 Ahead of our Premier League opener against Leeds United, I spoke to a Leeds supporter I’ve known for most of my life.

Kevin Condon is one who set off on his travels over and back to the UK throughout the tough years for Leeds to pledge his support to the cause.

He was understandably buzzing to see his team back in the top flight last season, even if the Reds rained on their parade at Old Trafford with a 6-2 thumping, but credit to him for answering a few questions for Stretty News.

Dale O’Donnell: What are your expectations this season – can last season’s 9th place finish be built on?

Kevin Condon: “To be honest and be critical, we should have been thrilled with exceeding expectations last season. I feel like the football was unbelievable to watch and was a credit to the style Bielsa had the players play. Realistically, will there be a little bit of a regression this season? Quite possibly given the little money we have spent in the transfer market and the impending injury list which goes with Bielsa’s style of work. However, we will have more then enough to be comfortable mid-table for another season I feel.”

Dale: How far can Leeds go under Marcelo Bielsa, normally it all goes wrong or he leaves?

Kevin: “The sky really is the limit for this season with a break of luck and no European football. Similar to Arsenal, it is an opportunity for the coming season to have a crack at the top 6 focusing solely on the league given the short pre-season and quick turnover of games in the last 18 months for well established sides, it does give rise to the belief that Leeds can be really dangerous. This is the longest stint Bielsa has ever had at managing a club, so much so that it has broken the stereotypical mould of the rot that can take place with the demands he puts on his staff, owners and players. Bielsa has an innate ability to create the extraordinary from the ordinary, nothing more exemplified then by the rise of Kalvin Phillips, Stuart Dallas and Patrick Bamford. His players are willing to go out on their shield for him which does lead to an extra sense of stability which Bielsa has not had before. The club appreciate they would not be where they are without him, something which was never the case in Bilbao, Marseille or Lazio.”

Dale: One reader asks – ‘How did it feel to wait 16 years only to get pumped 6-2 and have Scott McTominay doing step-overs in your face?’

Kevin: “It hurt and hurt a lot frankly. That game was absolutely bonkers, it realistically could have been 10-6 to Manchester United given the three world class saves De Gea made from Raphinha and Bamford. United displayed hunger and desire on the day that Leeds did not. Simple as that. Phillips being withdrawn at half time signified that Leeds simply were not at the races. When he plays well, so do Leeds. McTominay and Bruno smothered him on every possession and Solskjaer deserves praise for his tactics in the game without doubt.”

Dale: As a Leeds supporter from Ireland, tell us, were you rooting for England against Italy with Kalvin Phillips playing such a key role in England’s Euro 2020 campaign? And be honest.

Kevin: “If I was to be totally honest, part of me wanted to prove his doubters wrong and he unquestionably did. I had a conversation with you during the promotion season and said I felt Ben White and Phillips would both be in the England squad at the Euros, their quality was just unparalleled. Kalvin has a remarkable story with a hard upbringing and projects himself as a lovely young man to be fair to him, very much exemplified by his consolation of Bukayo Saka after his penalty miss and having his recently deceased grandmother’s name on his boots during the Euros. Phillips will be a hero in Leeds for as long as he lives, being responsible at times for single handedly pulling us through games to get us promoted.”

Kevin: “I don’t even see this as a debate to be honest. England’s biggest failing in the whole European Championships was not playing Phillips in his proper position as a central sitting midfielder. Rice would have played better where Phillips did and Phillips where Rice did. He is exceptional at controlling the tempo of the game and allowing centre backs coming out of the defence by slotting into their position, an issue which England had against Denmark and Italy at times. They genuinely did not even get the best out of him. His distribution was limited to the extent it can be exhibited because of where he was asked to play, which he did with aplomb. Phillips is technically a much superior footballer but Rice has youth on his side.”

Dale: What have you missed most about going to games?

Kevin: “The walk to the game funnily. Just the build up of people swarming upon their ‘church’, the crescendo of noise, a fantastic sight and sound, something which all fans will have missed.”

Kevin: “Modern fans videoing the game while they are at the stadium. Watch the game, enjoy, soak in the moment. You have paid enough to be there.”

Dale: Finally, before you go, try explain to us what Bielsa sees in Daniel James? Many of our readers don’t rate him at all, which I think is harsh…

Kevin: “James has qualities, to be honest I don’t think he knows how to use fully. I would say he looks like a player who lacks coaching as crazy as it sounds at Premier League level. His end product is horrendous but his work rate is outstanding. He may function well as a full back/wing back as he gains in years, just feels like he needs more consistent exposure to higher level football. A loan move may prove beneficial for all parties this season.”