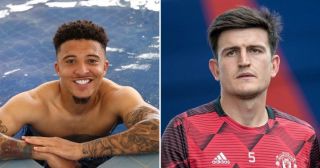 Jadon Sancho finally completed his transfer to Manchester United this summer after over two years of constant speculation. Harry Maguire has backed his new teammate to become a star at the club.

Harry Maguire was speaking to Sky Sports when he said: “I am really excited for him, he is an exceptional talent.

“He is the type of player — with the confidence he has — who can be a real star for this club and I feel like in the future and the success we have, he can have a big part to play.”

Thankfully, the deal was smoother this time around and United got it done nice and early without any reason to panic.

The skipper likened the transfer saga to his own arrival at United in 2019.

“I think Sancho has been linked with us for a couple of seasons now,” Maguire added.

“It felt a bit like my transfer when I was joining Manchester United, where it did not happen one season but the following season we managed to get it over the line.”

The former Leicester City defender hints here that he was edging for a move to a bigger club the year before he left the King Power Stadium.

Maguire is expecting a competitive Premier League campaign after United strengthened in the summer, with three additions so far: Tom Heaton, Sancho and Raphael Varane.

“I think this season is going to be more competitive than ever,” he continued.

“Manchester City won the league last season and they are a top team. They have obviously signed Jack [Grealish], who I know really well. He is a top player so they are going to be strong.

“Chelsea, Liverpool too- whoever puts good runs together and remains focused [will do well]- but the most important thing for us is concentrating on ourselves.

“We have got to improve on last season and we will aim to do that.”