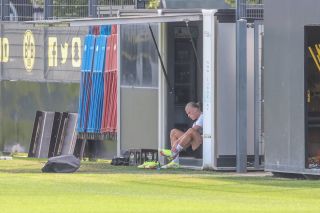 Every big club wants Erling Haaland but reports suggest the Norwegian club has already told Real Madrid where he wants to play his football next.

Although Ole Gunnar Solskjaer has a very good relationship with the striker from bringing him into the first team as a youngster at Molde, United’s path to the player now looks complicated.

The Red Devils agreed a one-year deal with Edinson Cavani to keep him at the club for another year, and nobody else seems to be making the move for the Norwegian goalscorer this summer, making a transfer more likely next year.

“Haaland is a willing party [in Perez’s plan],” he said on the Transfer Window podcast. “Information I have is he’s told Real Madrid he wants to come there.

“He’s waiting for Real Madrid to put together the money.

“That deal becomes cheaper because of the release clause.

“Some people suspect there’s a deal already in place with Dortmund, that’s why they’ve been so adamant he’s not for sale in the last few weeks of the market.

“They make a profit on him regardless, they bought him knowing he’d move to a bigger club once they’ve had time to use him in their team.

“He’s happy to stay there and wait a year before getting that preferred move to Real Madrid.”

This, if true, represents a blow for Solskjaer, who I’m sure would like nothing more than to bring Haaland to Old Trafford.

United have already signed Tom Heaton, Jadon Sancho and Raphael Varane this summer but Solskjaer has hinted that our business isn’t done yet.

Does this mean Kylian Mbappe stays at PSG?