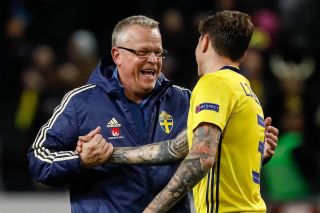 Victor Lindelof has been awarded the role as captain of the Sweden national team.

The Manchester United defender is seen as one of the main leaders in the side after a decent Euro 2020 campaign.

The former Benfica star has made 45 appearances for Sweden since 2016 and he was part of the U21 national team that won the European Championships in 2015.

As things stand, Lindelof has represented the senior side at three different championships: Euro 2016, World Cup 2018 and Euro 2020.

“It is a very great honour but also a great responsibility,” Lindelof said, as per svenskfotboll.se. “When I was growing up, I dreamed, just like all other young footballers, of playing for Sweden. Every time I put on the blue and yellow shirt, I feel an enormous pride. To now be able to represent the country with the bandage around my arm will be very big for me.”

We are delighted for Lindelof at a time many United fans may feel he is about the be pushed out of the frame at Old Trafford, but I don’t think that will be the case because manager Ole Gunnar Solskjaer rates him.

The addition of Raphael Varane will open up the door to different formations for the first team. There will be games that need three at the back, with the help from wing backs, and United have three very capable defenders to make that happen.