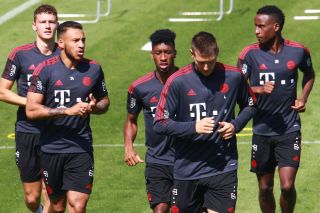 It appears more agents are using Manchester United to increase interest in their client, with the latest shenanigans involving Bayern Munich’s Corentin Tolisso.

The French midfielder is a very talented player, no doubt, but injuries and inconsistency have led to the club exploring other options.

And it never seemed like a plausible move for the club, with United not likely to forget Bastian Schweinsteiger’s fitness record when the Bundesliga club decided the time was right to show him the door.

The Telegraph’s James Ducker has debunked claims that United are interested in signing Tolisso, who he jokes is the 187th midfielder we’ve been linked with this year.

#MUFC have no interest in Bayern's Corentin Tolisso. The 187th midfielder they've been linked with this year and the latest example of the club's name being used to drum up interest in a player

He also tweeted that this is “the latest example of the club’s name being used to drum up interest in a player.”

Tolisso is still only 27, and probably has his prime ahead of him, but it’s too big a risk to take when United are in dire need of strengthening in the middle of the pitch. There has been claimed from L’Equipe that Bayern are willing to accept €10 million for the player’s signature.

Upon his return to Munich, Corentin Tolisso has been informed that he’s not part of Julian Nagelsmann’s plans. Bayern’s supervisory board has met and decided to try to sell Tolisso ‘as quickly as possible’. They are willing to accept around €10m [@lequipe] pic.twitter.com/kVO8FfcbML

These links should be ignored going forward. Ducker is one of the more trustworthy journalists when it comes to United.