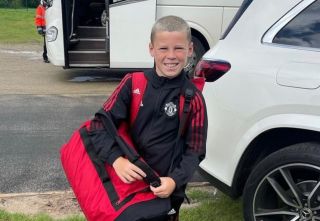 The oldest of Wayne Rooney’s four sons has been pictured on social media ready to set off on his first trip with the Manchester United academy.

The 11-year-old followed in his dad’s footsteps when he signed a contract to join the club’s youth academy in December 2020.

Wayne Rooney spent 13 years at Old Trafford and knows his son will be looked after at the club.

He uploaded a photo to Instagram captioned: “Good luck to my son Kai on his first trip away with @manchesterunited.”

Read more: Raphael Varane will not wear No.4 at Manchester United next season

Former United academy star Ravel Morrison, who recently signed for Derby, commented the followed: “Next up.”

There will be high hopes for Kai but at this stage of his development it’s about enjoying yourself.

I recall the excitement whenever I set off on football trips as a schoolboy player – but sadly, it wasn’t with Manchester United!

All the best to Kai.