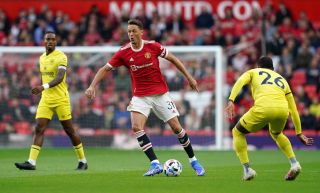 Nemanja Matic has stressed the importance of getting over that hurdle of winning your first trophy as a team as Manchester United continue to build towards the first piece of silverware under Ole Gunnar Solskjaer.

Solskjaer’s side came ever so close last season in the Europa League but agonisingly missed out on penalties against Villarreal in the final.

Nemanja Matic, who did not take part in the final, has insisted that despite the loss in Gdansk earlier this year, Manchester United are improving as a side. The former Serbia international did, however, also highlight that it all boils down to trophies in the end.

“This season we have to challenge for every trophy and finally to win something, because we need that one trophy. After that we hope it will be easier, the team needs to feel that [winning] energy and I’m happy how everything has been going.

“The most important thing is everyone can see that we are improving and that we play better and better, and especially now we have such a good squad. In every position we have two or three top-class players. Everyone needs to be positive and the target for us this season needs to be a trophy.”

Supporters have been treated to an unusually proactive transfer window from Manchester United this summer, with the arrivals of Jadon Sancho and Raphael Varane both confirmed by the club before the end of July.

Sancho, who took part in training for the first time earlier this week, could play a part in Saturday’s Premier League game against Leeds whilst Varane is expected to complete his move imminently.