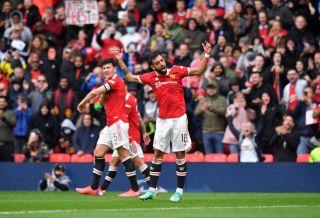 Bruno Fernandes became an instant fan-favourite at Manchester United when he joined the club in January 2020. The Portuguese midfielder immediately understood the pressure of playing for the club, which supporters recognized early.

At the time of his arrival, Paul Pogba was recovering from a lengthy spell on the sidelines and United lacked a leader in midfield, something Fernandes brought in abundance.

In his first Manchester derby, the former Sporting captain put his finger to his lips at Pep Guardiola on the touchline, an act which would win over any United supporter.

A chant for the Portugal international had already been debuted, however, with a special tribute to Fernandes’ similar career path to Cristiano Ronaldo – he even had a go at singing it himself (see below).

The 26-year-old has now revealed that although he likes his chant, he prefers Anthony Martial’s chant, which includes a dig at the English press for their treatment of Martial before he had even kicked a ball for the club.

“It’s probably my favourite. I really like mine and it should be my favourite [laughs], but the one for Anthony is really good.”