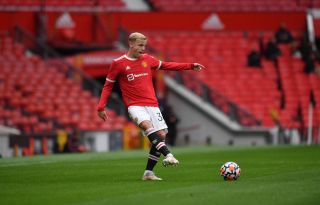 The Netherlands international was rarely seen as an option for Ole Gunnar Solskjaer, despite being fit largely for the entire season.

The misery was compiled for Van de Beek earlier this summer when he was forced to pull out of this summer’s European Championship due to a persistent groin injury, which also hampered him in Manchester United’s run-in.

Now, the 24-year-old has returned to the club for pre-season preparations and looks like a rejuvenated man, impressing in his two appearances against Brentford and Everton.

A report in the Telegraph, which maps his potential comeback story, claims that Van de Beek has been described by a source inside the Manchester United dressing room as a man ‘quietly on a mission’.

Furthermore, they say that Van de Beek was partly signed in anticipation of Pogba leaving the club but also that the midfielder is determined to force his way into Solskjaer’s thinking regardless of Pogba’s future.

The former Ajax star was also not interested in listening to potential exit proposals last January, as has been the case this summer.