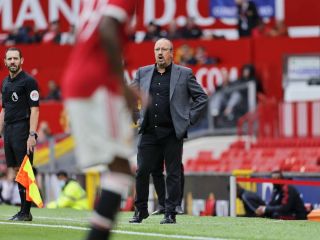 Everton manager Rafa Benitez has praised Manchester United after seeing his side concede four at Old Trafford in both side’s final warm-up game before the new Premier League season.

Benitez, who usually declines to offer any kind of positive criticism to Manchester United, was humble in defeat and accepted that his side failed to compete with a rampant United side.

A costly mix-up between Lucas Digne and Jordan Pickford in the opening exchanges allowed Mason Greenwood to open the floodgates with the first goal of the game.

Just minutes after, Harry Maguire gave United a two-goal cushion with a bullet header and a brilliant free-kick from Bruno Fernandes ensured that Ole Gunnar Solskjaer’s side went into half-time three goals to the good.

Everton threatened after the interval, coming close through Andros Townsend and Demarai Gray but were ultimately left behind in the contest long before. A looping header from Diogo Dalot late in the game proved to be the killer blow for the Toffees.

“Like we did in the other games we want to try and create chances, trying to move forward quickly and I think we did and we tried today, but obviously we are talking about the team that is one of the top teams in the Premier League,” Benitez is quoted as saying by the Manchester Evening News.

“They are very strong physically and also they have the quality to play very precise, so I think it was not easy for us but some of the ideas that we were implementing during the pre-season is what we have to do now.”