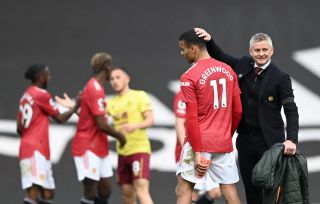 Ole Gunnar Solskjaer’s first full campaign in charge of the club had its low points but also many highs, with Mason Greenwood’s emergence at the club definitely being one of them.

He made his debut the season before but the real breakthrough would come later, with a full-blown explosion breaking out during Project Restart later in the campaign.

It wasn’t long until Greenwood was recognized by England manager Gareth Southgate and he was subsequently picked for the England squad. The 19-year-old’s confidence dithered at the start of the 2020/21 campaign but in an encouraging report from The Athletic, it’s claimed that the youngster is growing into an influential figure in the Old Trafford dressing room.

Read more: Daniel James happy to have fans back at Old Trafford

It’s claimed that when his confidence dipped last season, Ole Gunnar Solskjaer spent time ‘guiding’ the forward towards striking the right balance, highlighting his skills as a man-manager.

Greenwood is said to be a ‘boisterous personality’ as the team travels from game to game and has no issue dishing out jokes or being the butt of one himself.

Clearly, despite his tender age, Greenwood is maturing with each passing day, and the unfortunate events in Iceland nearly a year ago are long forgotten. Now, Manchester United have a teenager ready to set the world alight.