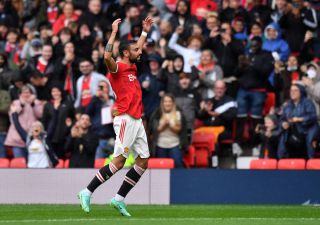 Bruno Fernandes has welcomed fans back to Old Trafford after helping the team secure a 4-0 win over Everton in their final pre-season fixture of the summer.

The midfielder starred, as per usual, scoring a beautiful free-kick in the first half. The goal was watched by 55,000 people at Old Trafford, the highest capacity crowd since March 2020.

Despite nearing 18 months at the club, Fernandes has only played in front of a sold-out Old Trafford on a handful of occasions, owing to the COVID-19 pandemic, which struck less than two months after joining from Sporting CP.

Fernandes was delighted to see the Old Trafford faithful back at the ground against Everton, issuing a passionate response when he was quizzed on it after the game.

“It’s different when we have the fans back,” Fernandes said, as per the official Manchester United website. “The feeling after scoring a goal, the shouting of the fans, everything, it’s really nice to have them back and we know they can give us confidence sometimes to do a little bit more and a little bit better.

Furthermore, the 26-year-old insisted that he is ready to take on another season after a hectic summer, which culminated in Portugal unexpectedly going out of this summer’s European Championship at the round-of-16 stage.

“I’m feeling ready honestly,” he said. “It was a good break for me, I enjoyed it. I’ve come back and had two weeks of training and I’m feeling fresh and ready to start the season.

“Now we have one more week to prepare for the game and we have to prepare well because it’s a different game, different intensity, different team, different way to play. We know what to expect and I hope we can have the same result as today.”

Less than one week remains until Ole Gunnar Solskjaer and his side kick off their Premier League season, with Leeds United waiting in the wings to face United at Old Trafford next week.