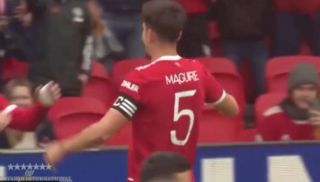 Manchester United have started the game brightly and lead 2-0 after 15 minutes against Everton.

The result in these pre-season games never matter, but you’d want to see a convincing display from the team today with the Premier League season opener against Leeds just a week away.

Mason Greenwood opened the scoring after a calamitous error at the back for Everton, involving chief suspect Jordan Pickford, who gave the attending fans something to laugh about early on.

United doubled their lead through skipper Harry Maguire with a bullet header past his England teammate.

Hopefully a sign of things to come this season.