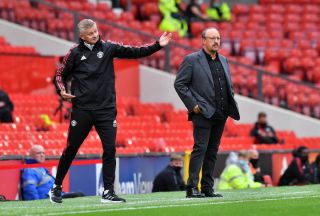 Ole Gunnar Solskjaer has offered an update on Raphael Varane’s situation and also confirmed that Jadon Sancho will report into training at Manchester United next week.

The Norwegian boss engineered a 4-0 win over Everton on Saturday, with goals from Mason Greenwood, Harry Maguire, Bruno Fernandes, and Diogo Dalot securing a win in United’s final pre-season game.

Solskjaer updated supporters on two summer signings after the game, confirming that Varane is currently isolating and that Sancho is due in training for the first time on Monday.

OGS: "With Raphael, medical has to be done. Isolating at moment, visa took more days than expected and have to follow the rules. Jadon in on Monday, hopefully in decent nick and can be involved (against Leeds)."

“Of course, the medical with Raphael has to be done. He’s isolating at the moment. (We) had to wait for visas, so, unfortunately, that took a few more days than expected but we’ve got to follow the protocol and the rules,” Solskjaer said after the game, as seen above.

“Jadon’s in for Monday and hopefully then he is in decent knick and can be involved (against Leeds).”

As confirmed by Solskjaer, Varane is isolating following his arrival to the United Kingdom earlier this week, which means that the 28-year-old can only complete his move to Manchester United once he is let out of quarantine.

Should the defender return a negative COVID test, he will be able to leave quarantine after five days and undergo his medical at the AON Training Complex.

Furthermore, the boss opened an avenue for Sancho to feature next week against Leeds, despite the 21-year-old not being expected back in training until Monday.