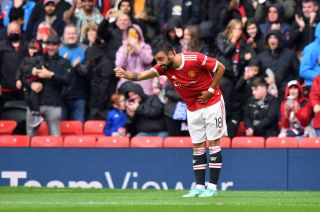 With just seven days to go until Manchester United kick off their Premier League season, they welcomed a new-look Everton side to Old Trafford for their final bit of preparation.

Rafa Benitez, who took over Everton from Carlo Ancelotti earlier this summer, endured a torrid half as he saw Ole Gunnar Solskjaer’s side put three past them in the first half.

Mason Greenwood opened the scoring early in the game after pouncing on an error from the Everton backline, whilst Harry Maguire marked his return to the side with a goal just minutes after.

It was, however, Bruno Fernandes who would steal the headlines in typical Bruno fashion. Manchester United had worked the ball nicely down the left channel before a foul on Nemanja Matic was awarded.

Fernandes, who returned to full training before United’s 2-2 draw with Brentford last week, stepped up and scored an unstoppable free-kick from 25 yards.

Jadon Sancho reacted to the beautiful strike on Twitter, as seen above, accompanying the name of his new teammate with the ‘heart-eyes’ emoji. Sancho is due to train with the squad next week and could make his debut against Leeds next Saturday.