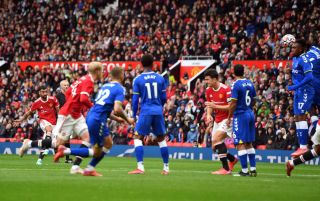 Manchester United have ended pre-season in the best possible way as a four-goal win over Everton rounds up the summer for Ole Gunnar Solskjaer’s side.

Solskjaer named a strong side for the visit of Everton, with several first-team regulars returning to the fold for the first time since last season.

Anthony Martial, who hasn’t featured for the club since March this year, started the game following a troublesome knee injury. Bruno Fernandes marked his return with a goal whilst England stars Luke Shaw and Harry Maguire starred.

Mason Greenwood opened the scoring in the first half with an easy finish after capitalising on a calamitous mix-up between Lucas Digne and Jordan Pickford. Harry Maguire made matters worse for Rafa Benitez just minutes after, notching home United’s second with a bullet header.

It has, however, Bruno Fernandes, who would steal the show. The 26-year-old scored the third goal of the game with a perfectly placed free-kick from 25 yards. The former Sporting captain made his first appearance of pre-season and looked as fit as ever ahead of the new season.

Diogo Dalot piled the misery on Everton as he scored United’s fourth goal with the last touch of the game with a looping header over Asmir Begovic.