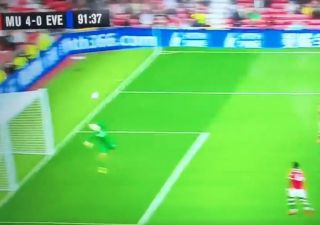 Manchester United beat Everton 4-0 in their final pre-season outing as Diogo Dalot scored a looping header at the very end.

The Portugal international came off the bench in the second half to get some extra minutes under his belt.

With his future unresolved, and fans unsure whether Dalot will be at the club this season, he’s left his mark against Everton – a club with links to the full-back this summer, as per The Athletic.

Rafa Benitez is said to be a fan of Dalot but I doubt he enjoyed seeing him sort United’s fourth goal against the Toffees.

Looking back at the goal, it has a bit of Javier Hernandez about it. Dalot turns his head and somehow directs the ball into the back of the net.

It was a very good run out for the lads ahead of next week’s Premier League opener against Leeds.