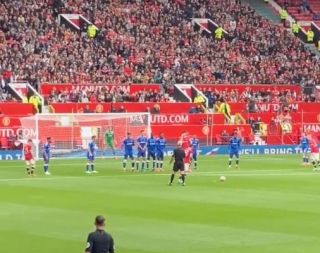 An alternative view has captured the true beautiful behind Bruno Fernandes’ free-kick as he scored against Everton in a pre-season friendly this afternoon.

There are approximately 55,000 fans at Old Trafford and one managed to record Fernandes’ free-kick as the ball flew past Jordan Pickford for a third time in the first half.

The ball is curling in the air and dips perfectly to hit the back of the net.

Facing into a new season, Fernandes will want to ensure he wins a trophy this season.

If they keep playing like this, it will be hard not to get excited at the prospects of a new campaign.