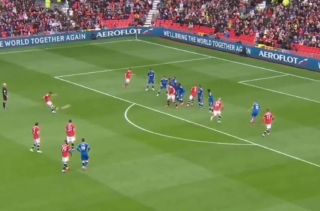 Manchester United are in action against Everton at Old Trafford for their final warm-up game before next week’s Premier League curtain-raiser against Leeds United.

Ole Gunnar Solskjaer saw his side’s match against Preston North End last week cancelled due to a COVID-19 scare but follow-up tests revealed that no player had tested positive, which eased fears and allowed the first-team squad to resume training.

Solskjaer named a strong side for the visit of Everton, with Anthony Martial making his first appearance for almost six months. Harry Maguire and Luke Shaw, who both played key roles in England’s run to the Euro 2020 final, also started the game.

Manchester United opened the scoring through Mason Greenwood after a calamitous error from Jordan Pickford, before Harry Maguire gave United a two-goal lead shortly after.

Bruno Fernandes would, however, steal the show with a breathtaking 25-yard free-kick to score United’s third goal. A nice move on the left-hand side resulted in a free-kick, which Fernandes converted perfectly.