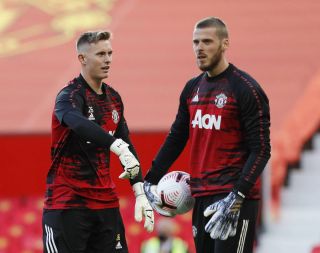 Ultimately, Manchester United’s goalkeeper situation is not a laughing matter.

It’s an issue I hoped would be resolved this summer, but there’s only 3-4 weeks left in the summer transfer window.

We know how Manchester United struggle to sell players and get the money they deem appropriate. It’s not often players want to leave a club like this and we’ve got many on the books that play nowhere near enough football to warrant the salaries they’re being offered.

Take David de Gea for example, the highest paid goalkeeper in the world who has lot his place as number one for United and Spain. Is he just going to sit on the bench next season and twiddle his thumbs?

While hailing the arrivals of Jadon Sancho and Raphael Varane as ‘exciting’ deals, Gary Neville warned that United must sort out their keeper situation.

“I think Varane is really exciting. Sancho’s exciting but it was almost inevitable that was going to happen,” Neville told Sky Sports.

“They needed to fill that right-wing spot. It’s been a bit of a problem for the last year or two. I think demonstrating patience and getting him, to be fair, was a bit more measured.

“I think just sort the goalkeeping situation out, settle that down, decide who is going to be number one and United are in a good position defensively and Sancho can hopefully bring that balance that’s needed in attack.”

De Gea has been United’s No 1 long before Solskjaer became manager. Sadly, there is no denying that his stocks have fallen in recent times.

Last season Dean Henderson established himself as a credible threat to De Gea’s role after impressing during two loan spells at Sheffield United. I think it’s a major blow to our plans that he is likely to miss the start of the season due to prolonged fatigue after testing positive for COVID-19 two weeks ago.

United also signed Tom Heaton this summer, so is there really a need for all three this summer – with Lee Grant recently renewing terms to stay at the club despite hardly ever playing.

It doesn’t make a lot of sense. It’s unsustainable and Neville was right to question it.

Q: Gary Neville said he always preferred knowing who the first-choice goalkeeper was?

Solskjaer: I enjoyed having one first-choice right-back when I played but I never had one!#MUFC

Solskjaer, however, appears to have knocked back claims that United’s goalkeeper situation is a mess. When asked about Neville preference of knowing who is first choice, the Norwegian said: “I enjoyed having one first-choice right-back when I played but I never had one!”