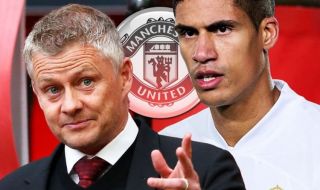 Ole Gunnar Solskjaer has provided an update on Raphael Varane’s transfer, in an interview with club media.

The club already announced on 27 July that a deal had been agreed with Real Madrid for the French centre-back, subject to a medical and the player putting pen to paper.

There has been a lot of excitement since that announcement, with fans hoping to see Varane get some minutes under his belt against Everton this weekend. While that looks unlikely, the World Cup-winner should definitely be ready to face Leeds United for our big Premier league opener.

Defenders don’t come much better than Varane, who we could not have topped this summer, and the plan is for him to become Harry Maguire’s perfect partner in crime.

The boss knows he’s signed ‘a proven winner’ and he will be looking forward to seeing the impact Varane has on his new teammates.

Varane is working hard so that he can hit the ground running in a United shirt, says Solskjaer.

[It’s] paperwork now, you know, with Brexit and all that,” the manager told ManUtd.com. “I was going to say malarkey but I don’t want to go into politics!

“It’s cost us a few days, with the visa, but he’s been looking after himself.

“Of course, we’ve got his medical first and hopefully that’s going to be done soon.”

Still no precise date or word on how long Varane must quarantine for after arriving in Manchester.