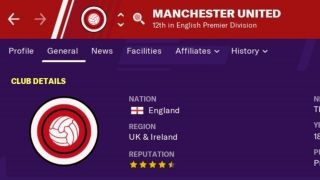 On May 23, 2020, The Guardian claimed that Manchester United would be suing the makers of the Football Manager series for allegedly infringing its trademark by using the club’s name.

United also took issue at how Sega and SI replaced the club crest with “a simplified red and white striped logo”.

Sega and SI responded because they felt they had done nothing wrong. They both accused United of trying to “prevent legitimate competition in the video games field by preventing parties not licensed by the claimant from using the name of the Manchester United football team within such games.”

In a twist this afternoon, Football Manager tweeted a short update after agreeing on a settlement to amicably resolve the trademark dispute.

Manchester United and Sega have agreed a settlement to amicably resolve their trade mark dispute relating to Football Manager. Both parties are pleased to resolve this matter to their mutual satisfaction. pic.twitter.com/OQXeY7nMXP

“Both parties are pleased to resolve this matter to their mutual satisfaction.”