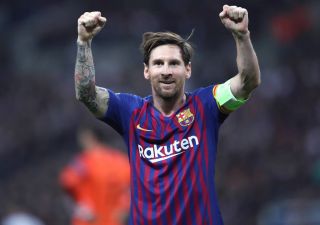 There isn’t a football manager out that would say ‘no’ to playing Lionel Messi.

And despite the fact that he’s played well against English opposition in the Champions League down the years, there are still people who question whether he could do it on a cold windy Tuesday night in Stoke.

Not that playing in Stoke would mean anything to Messi these days, with The Potters currently competing in the Championship, but this conversation stems around the physicality of English football.

One ill-informed caller (well, there’s usually quite a few) told talkSPORT the Argentinian couldn’t hack it in the Premier League.

“It’s the best league in the world. Ronaldo couldn’t hack it, so went & played abroad.”

This #MUFC fan is desperate for his side 𝙣𝙤𝙩 to sign Lionel Messi on a free transfer.

Hugh’s reaction says it all 😅 pic.twitter.com/f6FqzfARkQ

The lads in the studio are in complete disbelief.

Messi never played central midfield for Barcelona but this rocket scientist reckons that is where he’d be played in England.

Where on earth do they find these callers?