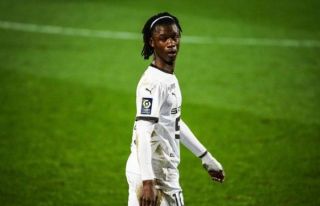 Speculation suggesting Manchester United are interested in signing Eduardo Camavinga from Rennes has been ever present this summer.

The French midfielder has been tipped as football’s next big star by many observers in his homeland, with links to clubs like Manchester United and Real Madrid never too far away.

Camavinga has just one year left on his contract at Rennes and there doesn’t appear to be a rush to secure his signature this summer, so there is a genuine fear he could leave on a free.

Rennes, like United with Paul Pogba, want to try and avoid that.

That much as been relayed by Santi Aouna of Foot Mercato (H/t Sport Witness) that Camavinga’s ultimate desire is to play for Paris Saint-Germain.

Instead, attempts are being made to ‘bring him to Manchester United’, as Aouna quotes an old tweet about the player’s entourage ‘pushing’ for a move to England.

Meanwhile, Caught Offside claim United are not currently in the picture when it comes to Camavinga’s new destination.

A club source told the media outlet that United do not have the funds required to sign the midfielder following Jadon Sancho and Raphael Varane arrivals.