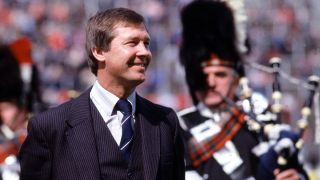 Sir Alex Ferguson is “thrilled” at plans by Aberdeen to build a statue in his honour.

The bronze monument outside Pittodrie Stadium will be the first in a series to honour the club’s heroes, with Ferguson’s statue set to be based on a photograph of himself celebrating Aberdeen’s 1980 title success at Easter Road.

Ferguson won 10 major trophies during his eight years at Pittodrie, including three Scottish League titles as well as the UEFA Cup Winners’ Cup and Super Cup in 1983, before joining Manchester United.

Speaking recently about the statue announcement, Ferguson said (via Sky Sports): “I am thrilled and honoured by this recognition from Aberdeen Football Club, where I spent a fantastic and memorable part of my managerial career.

“I am particularly pleased with the image the club has chosen to base the statue on and with the choice of sculptor whose recent work is incredibly lifelike. I can’t wait to see it!”

⭐⭐ “Sir Alex’s contribution to the Club was immense and it’s fitting that we honour him in this way."#StandFree

The statue will be sculpted by Andy Edwards, who has done incredible statues for legends such as Mohamed Ali and The Beatles.