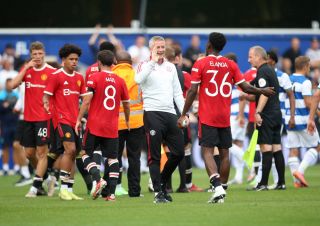 Anthony Elanga’s year didn’t get off to the best of starts. The young winger was sidelined at the start of 2021 with a shoulder injury and any involvement with the senior side looked unlikely.

A late fixture congestion allowed the young Swede to impress in Manchester United’s league run-in and after a tough Premier League debut against Leicester, Elanga started and scored on the final day of the season against Wolves.

It was only the start for the former Malmö star, who was rewarded for his fine displays with a first call-up to the Sweden U21 side, where he scored on his debut.

Despite being on the losing side at Loftus Road on Saturday, the youngster impressed again and put up brilliant stats in his 45-minute cameo.

Elanga had three shots, all of which being on target, scored United’s second goal, and had 33 touches on the ball despite only being introduced at half-time.

With several first-team regulars still not expected to be back until early next month, the tricky forward will be hoping to see plenty more action as the start of the season nears.