Former Manchester United defender Gary Neville has taken to his official social media to weigh in on the current debate regarding whether or not vaccination passports should be introduced.

The British Government, led by Boris Johnson, announced earlier this week that they’ll only be allowing members of society who are fully vaccinated against COVID-19 entry into nightclubs and other indoor venues (BBC News).

The PM’s decision has received a monumental backlash – just like French PM Emmanuel Macron has seen across the waters when he tried the same thing.

Nevertheless, still, with some uncertainty surrounding whether or not the Government will extend these shocking plans to sporting arenas/ stadiums, Neville has become the latest big name to offer his thoughts.

You shouldn’t need a passport to watch a football match ! Test events have been carried out with great success . https://t.co/zD9tywlq3T

Although slightly shocking that this topic has even become a debate, Neville also ran a Twitter poll asking his near five million followers to vote on whether or not vaccine passports should be required at sporting events.

The poll, which at the time of writing this article, has been live for two hours and has amassed a whopping 140,000 votes with 41.8% of people in favour of the proposal and the majority with 58.2% firmly against them. 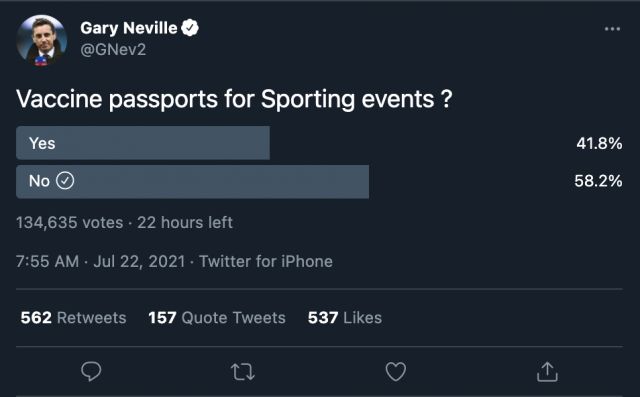